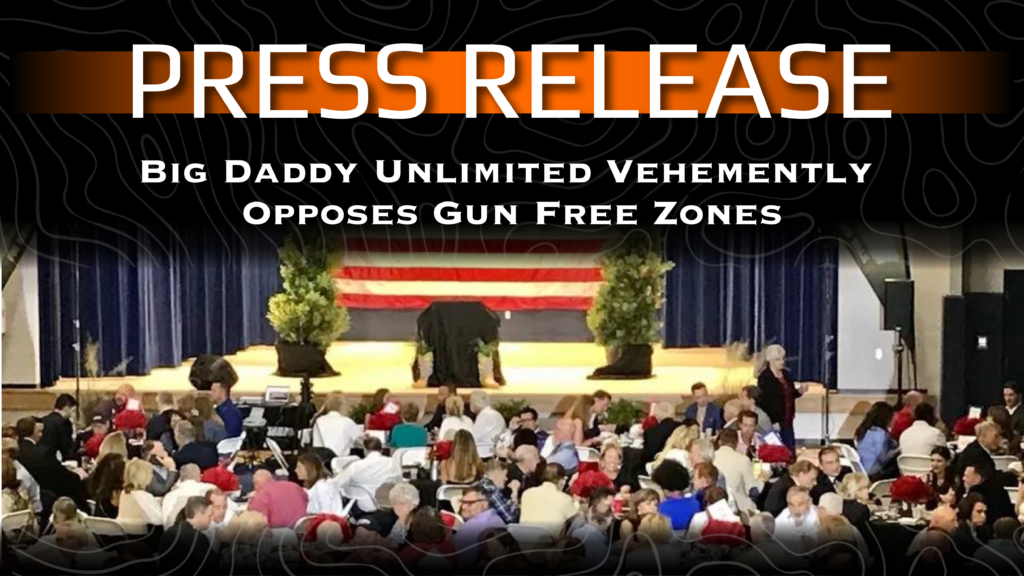 Gainesville, FL – On Tuesday, it was brought to the attention of our Big Daddy team that the Governor DeSantis campaign placed firearms restrictions on the Alachua County Republican Executive Committee (ACREC).

The ACREC claimed that they received the rules from the DeSantis campaign and accepted those rules to ensure the campaign’s attendance. When the campaign was asked to comment, they claimed that the FDLE was the deciding factor. Despite several attempts to speak to the FDLE via calling several departments and contacting via writing, as of this release, I have not received an answer.

Since learning about this Tuesday, the Big Daddy team took several actions to reverse this call. In our attempt to conceal carry our firearms at this event, we ensured that we did not rush to judgment and exhausted all of our options prior to making a public statement.

All of these contacts, pleas, and discourse resulted in the DeSantis campaign holding the policy and the ACREC refusing to recant on the rule. Actions speak louder than words; this is an anti-gun policy and in direct contradiction to his stance that gun-free zones are less safe.

Despite the event being private, it is taking place on public property, and under Florida’s preemption laws, we have the right to legally carry.

In his role, we recognize that Gov. DeSantis should have the best protection afforded to him, but that should not infringe on our ability to protect ourselves. On that front, as concealed carrying licensees in Florida, we are permitted to carry in the Florida Capitol. Why are we permitted to carry there, per Florida statute, but not at an event the Governor will be in attendance at?

At the time of this release, Big Daddy Guns had purchased a full-page ad and were unable to remove our support entirely. However, we did change the ad to support the verbiage: “BIG DADDY UNLIMITED VEHEMENTLY OPPOSES GUN FREE ZONES AND THE DISMANTLING OF OUR SECOND AMENDMENT. This ad space was purchased PRIOR to this INFRINGEMENT on our right to defend ourselves.”

Upon arriving at the event, we witnessed first-hand that the security measures were lackluster and noticed that several people were permitted entry without security checking their person for firearms or other prohibited items. This proves our point that the checkpoint presented an undue security risk for those who complied and chose to not conceal carry into the event.

In our choice to attend, we informed the other attendees who asked about the infringement on our Second Amendment rights why this particular location was different from other venues where politicians typically speak at events and metal detectors might be present.

At private venues, people are well aware in advance of the likelihood of not being able to carry their legally concealed firearms upon entry to the event. We believe it was a worthy endeavor to push back on what we viewed as not only duplicitous and contradictory but also an illegal infringement on our individual rights.

In reference to our steadfast efforts to illustrate the hypocrisy of this policy, State Representative Chuck Clemons identified co-founder Sherrie McKnight as the most staunch supporter of the Second Amendment present in the room last night.