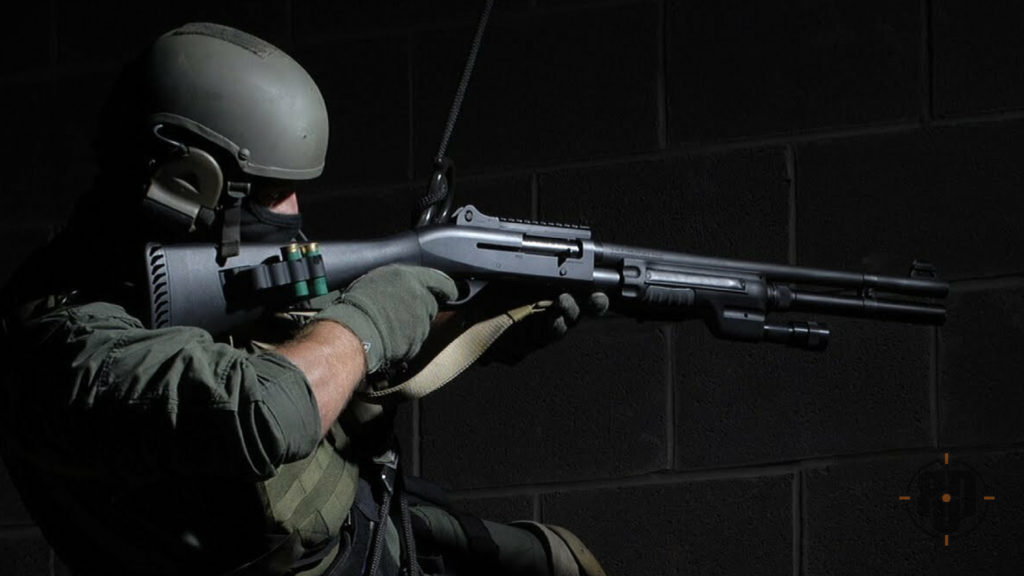 The Benelli M2 Tactical Shotgun is an inertia-driven, 12-gauge shotgun. It’s designed for self-defense and competition use.

The Benelli inertia-driven system was developed in 1967, and it remains one of the best shotgun operating systems ever developed. Benelli says that their inertia-driven shotguns have fired half a million rounds and still function reliably.

The inertia-driven system basically consists of three main parts: the bolt body, the inertia spring, and the rotating head bolt. It runs consistently and clean–plus it will handle everything from light field loads to 3.5-inch magnum shells.

It’s a light system that runs faster and cleaner than gas-operating systems in shotguns. The gas-operated shotguns are also a lot heavier.

Versatile Barrel for All Occasions

It has an 18.5-inch barrel with a protected, metal front sight. Two wings come up and protect the front post. It’s a tactical-style raised front sight.

It comes with three different, interchangeable chokes: improved cylinder, modified, and full chokes to allow for maximum versatility and accuracy.

It has a forend sling attachment along with a swivel attachment on the buttstock to allow the shooter to attach their preferred sling. This forend is very ergonomic and well designed. The forward sling attachment can also be used as a handstop in case the shotgun needs to be deployed quickly.

It also comes with a magazine extension which brings the capacity up to five-plus one with 2.75-inch shells.

The upper receiver is drilled and tapped for a scope mount, or a red dot railing. It comes with a really nice protected rear sight. It’s called a ghost ring rear sight.

Get Ready for Recoil

The buttstock is equally as comfortable as the rest of this firearm and has a really nice recoil pad. Inertia-driven shotguns do tend to have more recoil than gas-operated shotguns. Gas-operated shotguns have less recoil, but they tend to be a lot heavier. The recoil pad helps with comfort and handling even with the recoil.

This is a great shotgun for self-defense or competition. There are a lot of aftermarket parts out there to customize it even further, so check out the Benelli M2 Tactical Shotgun.