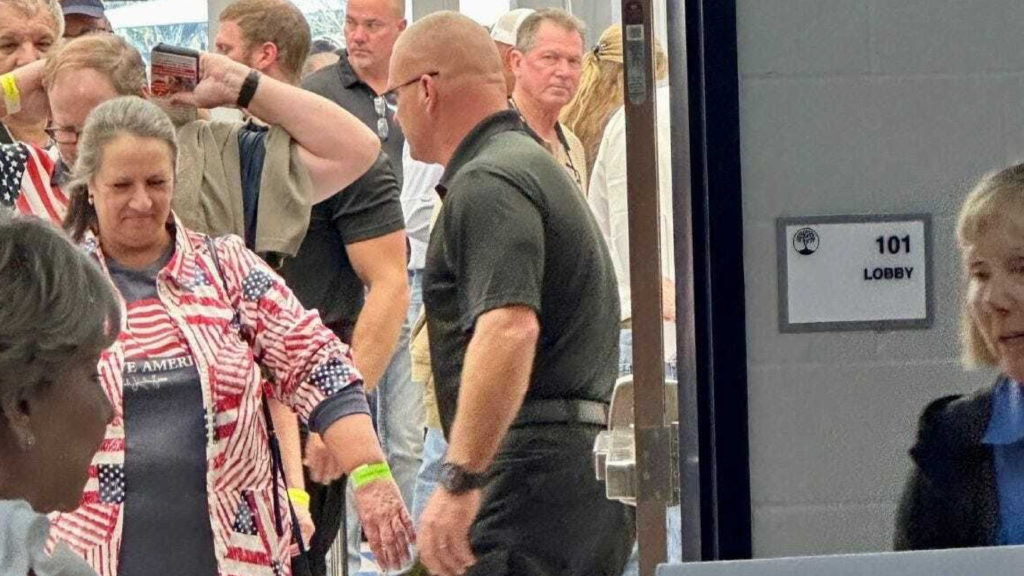 Legally armed Floridians had their Second Amendment rights trampled Thursday evening during a fundraising dinner in Alachua County where Gov. Ron DeSantis was the keynote speaker.

As a result, scores of Florida Concealed Weapon and Firearm License holders were illegally disarmed, and not one public official will own the decision.

As we first revealed in a story published Tuesday, donors attending Thursday night’s “Ronald Reagan Black Tie and Blue Jeans BBQ” were warned in an email that legally carried firearms would not be allowed.

The $60-per-plate fundraiser was organized by the Alachua County Republican Executive Committee and held in the Legacy Park Multipurpose Center — a public building owned by the city of Alachua, which is taxpayer funded and supported.

Before they were allowed inside, private security officers with metal detectors searched every single attendee.

Alachua Police confirmed that firearms were prohibited inside the public-owned building. One APD officer said the barbecue was a “private event.”

According to Ann Stone, treasurer of the Alachua County Republican Executive Committee, she and other organizers were told by DeSantis’ reelection campaign and the Florida Department of Law Enforcement that the governor would not appear if firearms were allowed inside the building.

If FDLE issued the no-guns directive, they would be regulating firearms, which violates Florida’s powerful preemption statute. The 35-year-old law allows only the state legislature to regulate guns and has severe penalties for any public official who violates the statute, including a $5,000 fine and removal from office. As of Thursday evening, FDLE has acknowledged it received the records request but has not yet produced a response.

Lindsay Curnutte, DeSantis’ political communications director, would not say who issued the no-gun rule — the DeSantis campaign or FDLE.

“We do not disclose matters of the Governor’s security, and we refer you to the Florida Department of Law Enforcement,” Curnutte said in an email.

FDLE spokeswoman Dana Kelly did not return calls seeking comment for this story.

DeSantis’ gun-free zone was not well received by the state’s gun-rights community.

“Clearly, Gov. DeSantis knows how to get action on his priorities, and while he has talked the talk for some time on issues such as constitutional carry, open carry, and the right to keep and bear arms, his actions have spoken louder than his words – there have been no actions,” said Sean Caranna, founder and executive director of Florida Carry, Inc. “Today, his campaign has decided that our society is safer when fewer people have guns. These are not the Second Amendment values held by Floridians. We urge Gov. DeSantis to return to his Second Amendment roots.”