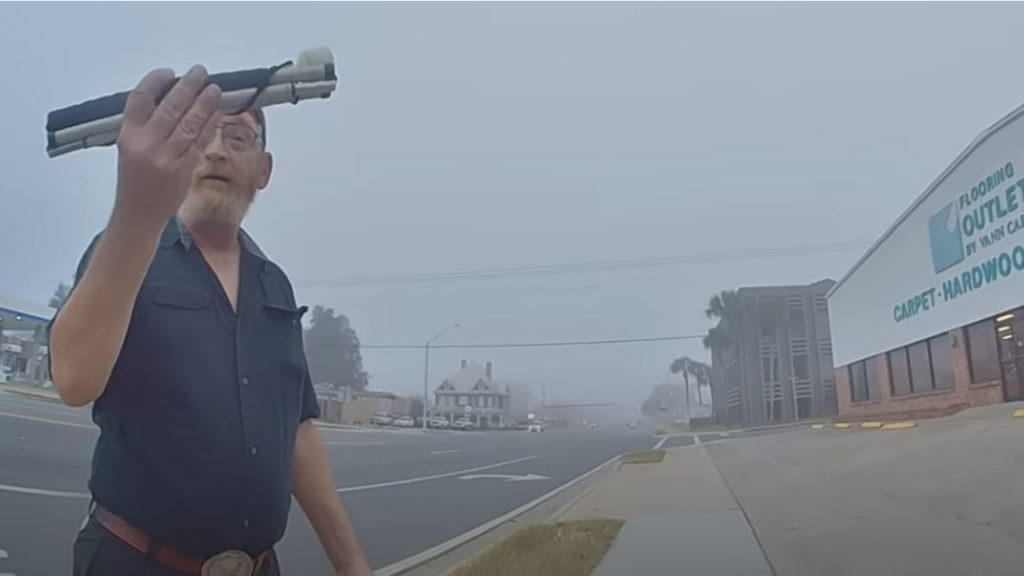 James Hodges, who is legally blind and cannot drive, was walking home from jury duty in Lake City, Florida one week ago when he was stopped by Columbia County Sheriff’s Deputy Jayme Gohdy, because she mistook his collapsible white cane for a pistol.

A video of their encounter was captured by Deputy Gohdy’s body camera. Hodges later posted a copy of the video on his YouTube page.

“What’s this in your back pocket?” Deputy Gohdy can be heard asking on the video.

“It’s a navigational aid,” Hodges said. “What’s the problem? Are you a tyrant?”

“Yeah, I am actually,” Deputy Gohdy said. “What’s your name and date of birth.”

“I don’t have to give that …” Hodges started to say.

“Have you ensured that it’s not a firearm?” Hodges asked.

“Well, you’re being one to me,” Hodges said. He pulled out a collapsible white cane from his back pocket and showed it to the deputy.

“Am I detained?” Hodges asked.

“Yeah, you are,” Deputy Gohdy said. “What’s your name and date of birth.”

Her sergeant arrived, whom the Sheriff’s Office later identified as Sgt. Randy Harrison. Hodges walked over to talk to the man.

“Her suspicion was that you were armed and she’s asking for your ID,” Sgt. Harrison said.

“I verified that I am not armed so there is no crime,” Hodges said. He refused to produce his ID so the deputies handcuffed him behind his back. Hodges did not resist. The sergeant pulled Hodges’ ID out of his left-front pants pocket.

“You are not allowed to search me,” Hodges said.

Deputy Gohdy ran a records check on Hodges with her radio.

“Yes, I am,” Hodges said. “I had to walk up here in the dark for jury duty, which was cancelled.”

“Why ain’t you using your stick,” the sergeant asked, as the warrant check came back clear.

“Alright, Mr. Hodges, was that that hard?” Deputy Gohdy asked.

“It’s gonna be,” Hodges said. “I want your name and badge numbers.”

“Put him in jail for resisting,” Sgt. Harrison said.

Hodges was placed in the back seat of the deputy’s squad car and taken to jail. At no point in Deputy Gohdy’s bodycam video did Hodges ever physically resist arrest. He was charged with resisting arrest without violence, a First-Degree misdemeanor punishable by up to one year in jail, a $1,000 fine, and 12 months of probation.

Hodges’ video has received more than a million views. The Sheriff’s Office’s social media accounts were deluged by posts calling for an investigation, and more.

Columbia County Sheriff Mark A. Hunter did not return calls or emails seeking his comments for this story, but his public information officer, Sgt. Steven Khachigan released the following statement announcing that the department was launching an internal investigation of Hodges’ arrest:

We are aware of the Columbia County Sheriff’s Office body camera video involving the arrest of Mr. James Hodges on October 31, 2022. Sheriff Hunter is troubled by what he has seen in the video and the matter is being addressed. An administrative investigation was initiated on November 3, 2022, when the incident was brought to our attention. If policy violations are sustained at the conclusion of that investigation, appropriate action will be taken. While we understand the frustration and concern associated with this event, please know we are working to resolve this matter as quickly as possible.

She indicated in her report she first saw Hodges in a crosswalk and “observed what appeared to be a silver (chrome) pistol with a white grip in his back right pocket.”

She wrote that Hodges “was found to be in violation of FL Statute 843.02, by obstructing the ongoing investigation when he repeatedly refused to allow identification of the object in his pocket as well as by refusing to identify himself. James (Hodges) was placed under arrest for Resisting without Violence and transported to the Columbia County Detention Facility without incident.

Deputy Gohdy never mentioned in her report that Hodges removed his cane and showed it to her and her supervisor. Instead, she wrote that she discovered it was a cane only after Hodges was handcuffed, which is incorrect.

In an interview, Sgt. Khachigan said Deputy Gohdy hadn’t been at the department very long, maybe a year at the most. He was not aware of any recent discipline.

Sgt. Khachigan acknowledged that while Hodges was charged by the Sheriff’s Office, the Columbia County State Attorney’s Office ultimately decides whether to file formal charges or drop the matter entirely.

Asked whether this was the type of law enforcement the public could expect in Columbia County, Sgt. Khachigan would speak only in general terms.

“If you look at our social media, do we have instances where our deputies have made mistakes? That is certainly the case. Anywhere is going to have that. I think you’ll find that the majority of the time most of our community members say they appreciate the job we do. Does that mean we’re without fault? No, it doesn’t. In those times we have to follow procedures that are set in place. In general, you can find times when we’ve sent out press releases before where we’ve shared good stories. Sometimes, there were some things not in a positive light. We’ve owned those things as well,” he said.

Florida only allows the open carry of arms while hunting, camping, or fishing. Absent those exceptions, open carry is illegal.

In 2015, when the legislature was considering making open carry legal, Sheriff Hunter spoke out against the bill.

In a letter to his constituents, Sheriff Hunter denounced the open carry bill.

“My highest priority is the safety of the citizens of Columbia County,” the Sheriff wrote. “I do not support the bill in its current form because I do not believe it will make us safer.”

“If we had open carry in Florida and there was believed to be a weapon, I could see your point,” he said. “It’s hard to speculate on hypotheticals. You know as well as I do that when they create laws, we don’t know what kind of language will be in there, but I see your point and where you’re going with that question. It’s hard to say whether it would have completely resolved this, but I do see your point.”