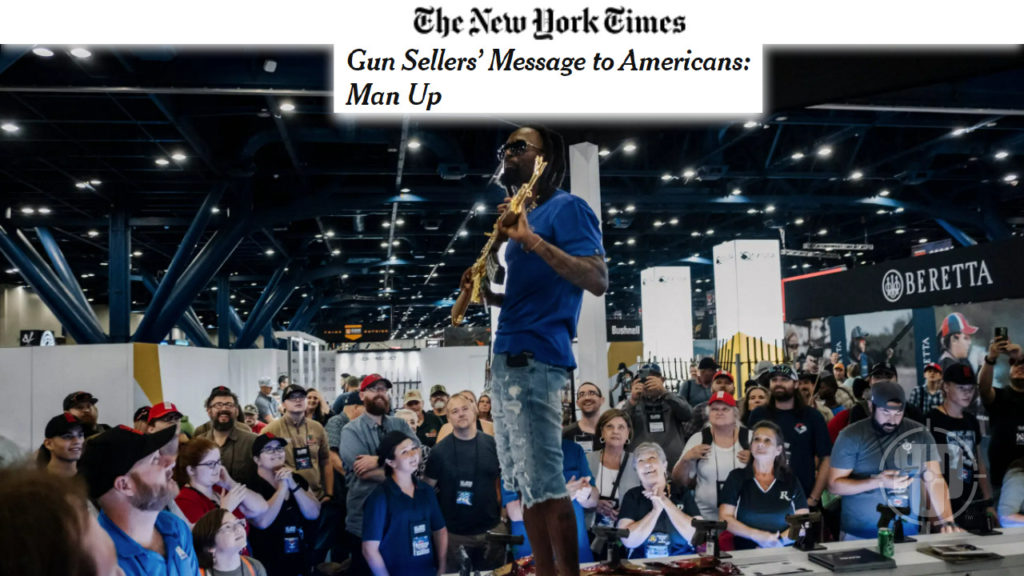 The story provides commentary on the modern marketing practices of several of the nation’s top firearm distributors. Big Daddy Unlimited was mentioned alongside industry-leading companies and organizations such as Brownells, National Rifle Association (NRA), Daniel Defense, Gun Owners of America (GOA), and others.

The article scrutinizes the marketing strategies of gun distributors saying that it focuses on messaging emphasizing self-defense, machismo, and fear. While critical of these marketing practices, the article highlights the success of firearm sales and the Second Amendment rights movement as a whole.

The first paragraph of the article mentions a meme posted on BDU social media pages made by a former employee.

Be A Man Among Men

The post referenced received a polarizing response on social media. Many viewers found it humorous and applauded Big Daddy Unlimited’s support of Kyle Rittenhouse using a firearm in self-defense. Other viewers took offense and falsely claimed that BDU was attempting to profit off of the deadly incident.

The post was not a part of any official marketing campaign and was not tied to any products in an effort to drive sales. Rumors even started that BDU had made t-shirts with the graphic, but nothing was made past the social media post.

The post was simply made to recognize that BDU believed Rittenhouse deserved justice for exercising his Second Amendment rights.

The article links to the BDU website’s ‘about us’ page and paraphrases part of its founding story:

Tony and Sherrie McKnight decided to enter the firearms business in 2012 when they became alarmed at the political rhetoric coming from anti-gun legislators who threatened to abolish the Second Amendment.

National Recognition of the Fight for the Second Amendment

Though the New York Times’ intent with this article certainly wasn’t positive, this story is proof of the growing momentum of the modern civil rights movement in defense of the rights enshrined in the Second Amendment.

Big Daddy Unlimited is further cementing its place at the forefront of the fight for the Second Amendment and we invite all of our members and future members to join us in this fight.

Together, we can ensure the Second Amendment and American freedom always prevail.